Things that matters! About digital transformation, design, culture and lifestyle in the Networked Society 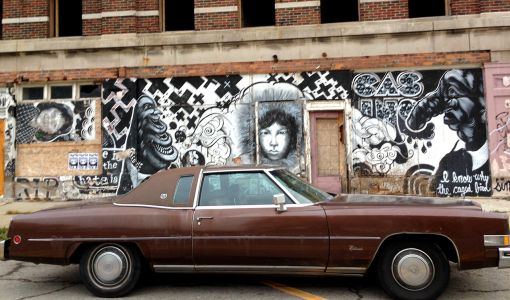 The fifth report in our Future of Commerce and Consumption report series, The Tale of Two Transforming Cities, depicts two cities that are redefining themselves through ICT and entrepreneurship. In the research for these reports, we visited two iconic American cities, Detroit and San Francisco: Detroit once famous for its motor industry, now more known for all its abandoned buildings and a budding entrepreneur scene; San Francisco known (apart from the classic tourist spots) for the tech companies in the Silicon Valley. Both these cities are redefining themselves through a number of grassroots initiatives and startups trying to solve a number of challenges.

Detroit is particularly interesting because it involves the failure of two of capitalism’s most important institutions: big corporations and government. When traditional institutions like those are no longer around to provide people with a place to be and a sense of meaning in everyday life, it becomes an increasingly individual project to make sense of the world and society. In Detroit, a new scene of small-scale businesses and social entrepreneurs is rising to fill the gap the institutions left and building a new identity. This movement includes the return of local craftsmanship, changed consumption patterns – such as buying local and avoiding big international brands – and community activism. One example of the new type of social businesses that are stepping in where society has failed is Rebell Nell. Rebell Nell is a graffiti jewelry workshop that employs disadvantaged women in Detroit and educates them in financial management to give them the platform to successfully change to an independent life.

If you find a lot of space and affordable properties in Detroit, San Francisco is the opposite. In San Francisco people are aware that the big corporations and the government are not going to fix the challenges we face. The “creative elite” is taking the visionary lead, both commercially and socially, and expectation is placed on digital technology’s ability to conquer the social and environmental problems of today. Yerdle, for example, is an San Francisco business with a higher purpose – an ambition to reduce the number of new things we all have to buy by 25 percent by swapping things we don’t use.

These types of developments are, of course, something that you can discover all over the world in different cities, with different starting points and different shapes. The New York Times recently published an article about Pittsburgh once known for its steel mills, but is now changing through a new food and tech boom that attracts people to the city. Which is the next American city in transformation we will read about?

Mikael is Senior Lead Designer at Ericsson UX Lab and an Ericsson Evangelist. He was previously Director at the Networked Society Lab. His specialty is in understanding how consumer behavior, emerging technologies and new industry logics are shaping the future society and in the intersection of these areas build great user experiences. Mikael believes that with the ongoing digital transformation we have a great opportunity to shape a better world. Mikael joined Ericsson in 1998 and is based in Stockholm. You can engage with him on Twitter at: @mikaeleb or at LinkedIn.